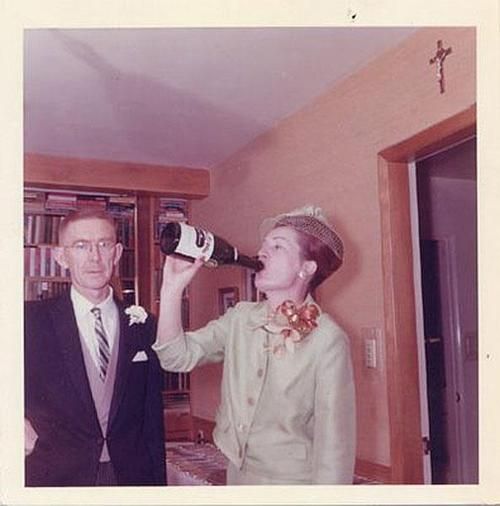 Midlife Crisis? No. Midlife Don’t Give a Shit…

You don’t often hear of women going through a Midlife Crisis do you? It’s always the men that go off the rails. Some start dressing in an unsuitable manner, I remember a friend’s Dad, who, as soon as he hit his forties, grew his hair long and started wearing leather trousers and a string vest. A strong look.

Some men buy an unsuitable car, again I recall another friend’s Dad who spent the family savings on a 2-seater sports car, meaning he could only transport one extra person at any given time. To add insult to injury, the car was a shit brown colour, forevermore know as the Poosche.

Some men just up and leave, running off with an unsuitable and unsustainable younger woman. Another man I know hit 45 and ran off with a stripper he met in a Gentlemans club, left his wife and 3 children and took this woman on a trip around the USA on the back of a (hired) Harley Davidson. On their return, she dumped him. He was surprised at this. No-one else was…

I believe us women don’t have Midlife Crisis’, we have Midlife Don’t Give A Shit. A time of your life when you care much less about what other people think of you and much more about pleasing yourself. There are many ways this can manifest itself, but for now let’s illustrate this with just 5 examples…

I have worked in the music business for over 20 years. There are a lot of people who are achingly cool and I guess they genuinely do love that unbearably cool new band that no-one else has ever heard of, and that’s all good. But I have no shame. For example, I will put my hand up and say I love Phil Collins. I don’t love his music in a post-modernist-80’s-retro-ironic way, I just bloody love it because the tunes are great. I love it because I can sing every word and do some air drumming. I also love The 1975, Mumford and Sons, Coldplay, Hall and Oates, Tim McGraw, Michael Buble, and I’m still mourning the ‘hiatus’ of One Direction, but at least there’s still Harry Styles to keep the fires burning. Like what you like and never feel embarrassed to say it.

2. Want To Get A Tattoo or a Piercing? Do it

‘Oh, but what if you regret it when you’re older?’, I am old! If I want to get another tattoo or my ears pierced again, then I will. It does help that there is now an acceptable middle-class place to have the piercing done. Maria Tash in Liberty has a lot to answer for! It’s a beautiful mecca for ladies of certain age who want to do something rebellious. With added diamonds. Someone should really open a Tattoo parlour that caters for the same clientele. I would be in there like a shot I’m telling you.

3. Lose Yourself In Trash TV

I have discovered a small circle of ladies at work who have the same obsession with The Real Housewives of New York / Beverly Hills / Orange County / Cheshire as I do. We are like a secret club, but really why should we be hiding? I do love a good gritty drama and maybe every so often, a worthy documentary about the state of the food industry, but I NEED to know what my ladies are up to. Yes, it’s mindless nonsense, but I love it. I also Keep up with the Kardashians, check into Love Island and there’s not a show about bad plastic surgery that I haven’t seen.

Not cool, not sexy but past 40 I demand comfort from my undercrackers. I could never get on with a thong even when I was in my youth. I did try my hand at slightly more adventurous under garments in the past. it didn’t end well. I’m pretty sure the man-made fibres gave me thrush. I was with a bunch of twenty-somethings a while back and they were showing each other the lingerie they liked, It looked like this…

I nodded sagely, said how nice it would look on them. On me it would be like a cheese wire going through uncooked bread-dough. I demand a 5 pack of M&S full briefs, they make me feel safe and contained and when I need even more extra strength, I wear these.

There is something to be said for ‘You Don’t Ask, You Don’t Get’, I need to get better at this but I am starting to lose the embarrassment I used to have with asking for things. I’m very good at asking people to explain something I don’t understand. I work with a few ‘urban’ music artists and a lot of what they say I just don’t understand because I am as old as their mothers, but you know what, most people don’t laugh at me when I ask what things mean. Last year I found out that ‘3 Wheel Ups’ doesn’t have anything to do with tricycles, it means that the record is so hot you play it three times in a row. See, you learn something new everyday, I’m not a complete Melt*

I’ll be back to nice clothes soon, hope you don’t mind these ramblings. To keep you going, here’s all the Etoile Isabel Marant that I love that’s on sale. Just because..

*Melt, A person who has no balls, needs to man up, gives in to anything.