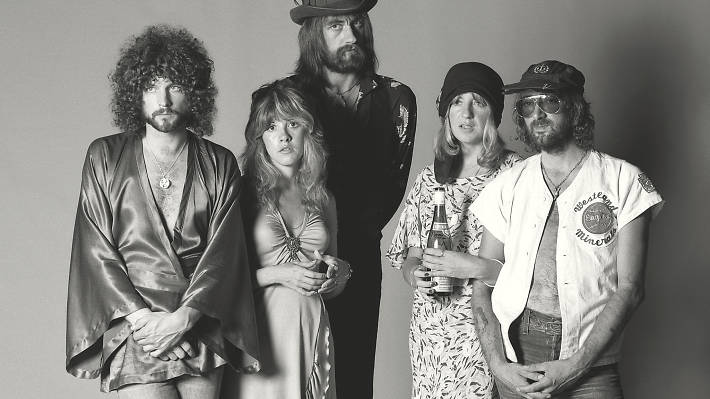 Go Your Own Way

Here we are with part two in a wildly indiscriminate series of ‘bands wot I like’ and how I can use them to inspire my shopping! It is about the music, but let’s be honest, it’s mostly about the shopping. Ladies, may I welcome you to the wonderful world of Fleetwood Mac…

Now, we all know that mixing business with pleasure can be a total nightmare, Fleetwood Mac, at their peak included  2 couples, John and Christine McVie as well as Lindsey Buckingham and Stevie Nicks. It was recipe for disaster, but by the same token,  it made for some sweet sweet sounds!

A potted History for you… Fleetwood Mac were formed in 1967 in London by Peter Green, joined by Mick Fleetwood and John McVie. Unfortunately Peter Green took too much Acid in Germany, lost his mind, joined a commune and wanted to give all the bands money away, so that was the end of that. By 1970 he was out. John brought his wife Christine into the band and they all decided to move to America, adding and dropping new members as they went along. In 1975 they picked up Lindsey Buckingham and his girlfriend Stevie Nicks, released the album “Fleetwood Mac”, hit the big time and life seemed peachy. But not for long…

The following year all the band relationships turned to shit. Mick Fleetwood found out his wife was cheating on him with his best friend. Lindsey and Stevie had a very acrimonious break-up that lead to Stevie copping off with Mick (it didn’t last long, he ended up marrying HER best friend),  and Christine McVie left John for the lighting guy. Are you keeping up? They wrote some bloody good songs about this mess though. These songs  made up the “Rumours” album that went on to sell over 40 million copies (who says heartbreak doesn’t pay?)

All this happened in just one period during the 1970s. The band have continued on and off for many years, despite various drug addictions and more huge rows, but let’s focus on the outfits from their heydays. I’m not saying get a perm and drape yourself in velvet and tassels, I’m just taking bits of inspiration from their looks, check this one out…

Loving the sparkly shirt on Buckingham, the Boho top on Nicks and the satin bomber on John McVie. Here’s a few outfit ideas loosely inspired by that…(Mick looks like someone I met at a rave at the Slough Centre in 1992)

Check out Mick here, he’s totally rocking that Kate Moss-esque skinny scarf / white shirt combo (we’ll gloss over the jaunty beret) Christine is all over the pyjama top and velvet boots vibe and Stevie is bang on trend with the floaty boho look.

We can all take one or two items from those looks and make it our own, Here’s how I’d style the skinny scarf and silk shirt  (FYI the silk shirts from & Other Stories are excellent and they come in loads of colours too)

Here’s my take on the pyjama top and velvet boots (apologies in advance for the continued inclusion of Gucci bags, but I like them a lot so you might have to get used to it.) I tend to get most of my ‘designer’ jeans from The Outnet as they have a great selection at decent prices, plus I’m too cheap to pay full price for expensive denim…

Finally, here’s an updated take on the more boho vibe of the ladeez…

That’s it for now. If anyone has any more suggestions for some musical related fashion inspo, let me know, I’m open to all ideas!