In the new spirit of 2017, I am stepping out of my comfort zone and trying new things that make me feel something different.  Yesterday I did something else I have not done before and went on a March*. To be honest I’m not much of an activist, I won’t be chaining myself to a radiator to protest the inflated price of Marmite post-Brexit anytime soon, but I felt I really should go to the Womens’ March in London yesterday. It felt like a movement that I wanted to be part of. I know we can’t change what’s happened in America, but we can makes our voices heard and shout about the things we are just not feeling that OK about.

I took my youngest son with me and we had the best time. The atmosphere was incredible. I nearly burst into tears when we arrived at the US Embassy and saw the thousands of others who had turned up. This is very unlike me. I have been called ‘Dead Inside’ on more than one occasion. I didn’t even cry at my own wedding FFS. The same cannot be said for my husband who sobbed all the way through it. I mean ALL the way through it, the vows, the dinner, the first dance. He never even made a speech as he couldn’t get any words out. I’m not sure what that says about him, or me, but we are still married 14 years later and I don’t think I’ve seen him cry since. Odd.

Anyway, I digress, The March. It was great. There were beautiful amazing women everywhere. I mean it, just stunners all over the shop. The Placards were hilarious. To the woman who made that ‘You Look Like A Wotsit Bruv’ sign, I salute you! It got me thinking about Slogan Sweaters and how that’s one way of quite literally expressing ourselves through our outfits. Who says fashion is shallow? Here’s my pick from some lovely small businesses… 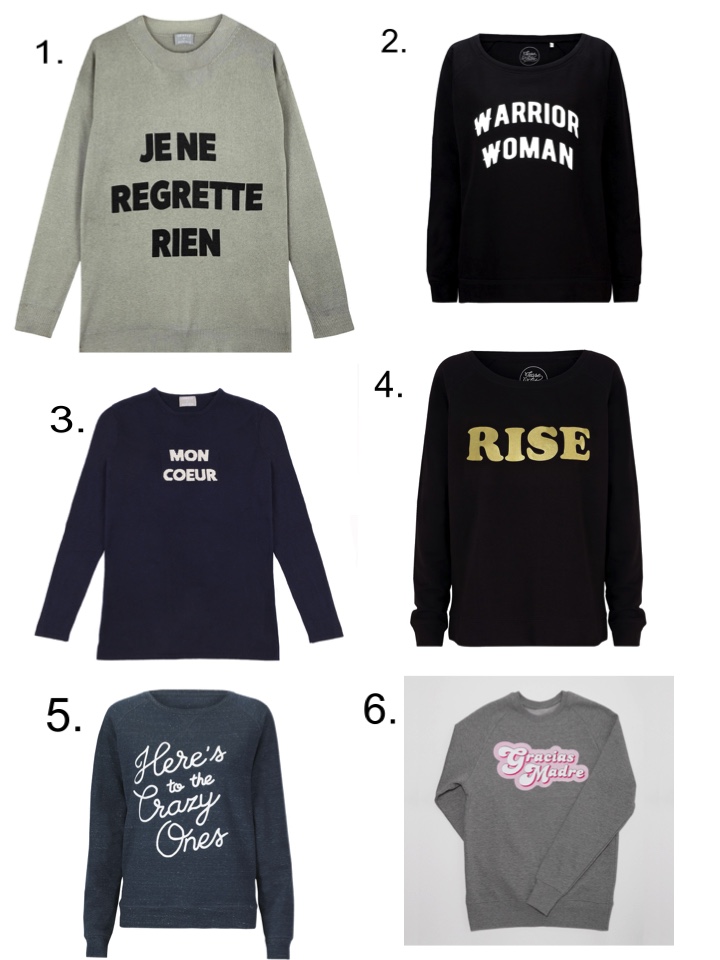 Here’s what I’ve found on the High Street…

I know we might not be able to change the world with a Slogan or a March, but when people come together it makes the world feel just a little bit of better place, and if wearing a nice jumper also makes you feel good, then what’s not to like?

*This is not strictly true. When I was at college I went on a March to protest against tuition fees. I’m not sure how much this counts as I only went because the boy I fancied was going. He ignored me so I went to the pub with my friends and got drunk on Special K cider. I don’t remember much after that…